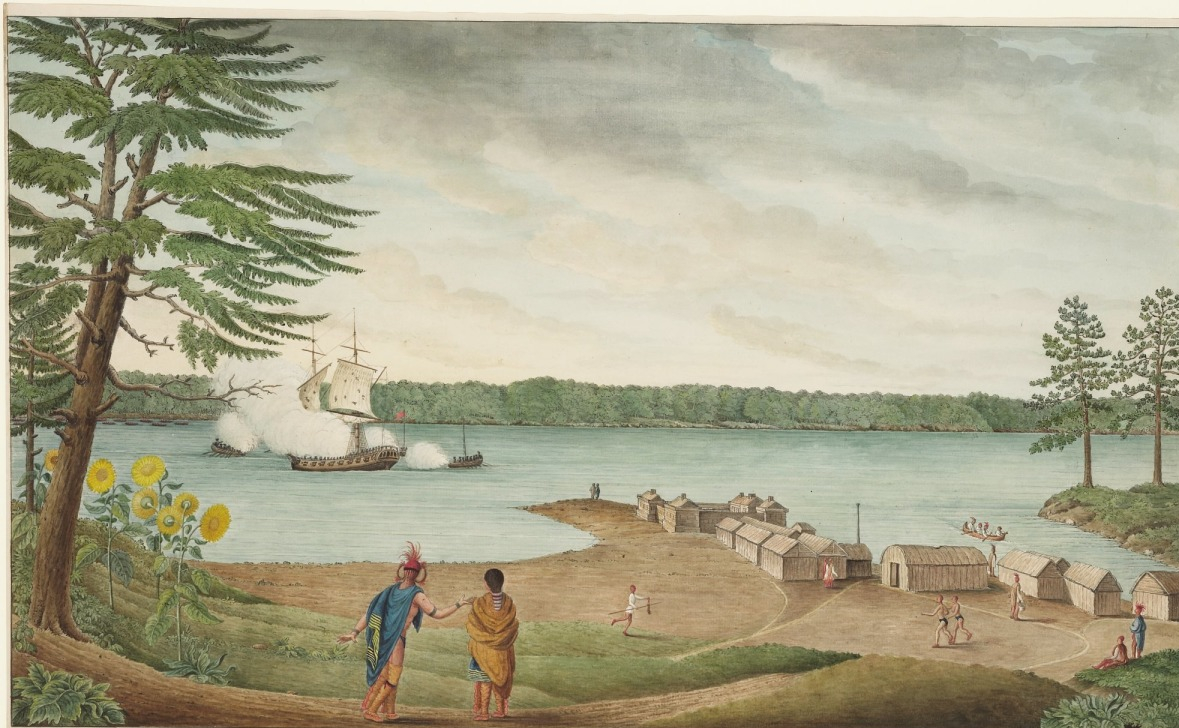 In the summer of 1777, the British launched what became known as the Saratoga campaign, an effort to gain control over the Hudson River valley. A large corps under General John Burgoyne moved south from Quebec toward Albany. Another body of troops led by Brigadier General Barry St. Leger was supposed to advance toward Albany from the west, from Lake Ontario.

St. Leger’s force was made up of 200 British regulars, a contingent of Provincials and Canadians, as many as 1,000 Native Americans, and around one hundred Hanau Jäger. The Jäger were commanded by Lieutenant Philipp Jakob Hildebrandt, a forty-three year old married father of three who had spent more than two decades in the service of Denmark, Hessen-Kassel, and Hessen-Homburg before joining the Hanau corps in 1777. The Jäger had been in Quebec for around two weeks when Hildebrandt and his company received orders in late June to join St. Leger’s corps. A few days later, on July 4, they set out on the journey down the St. Lawrence River. Two weeks later, they reached St. Leger’s main corps that was encamped on the Isle aux Chevreuils (Buck Island, later named Carleton Island), a small island on the mouth of the St. Lawrence River at Lake Ontario. From there, the combined force set out toward American-held Fort Stanwix in the Mohawk Valley.

Hildebrandt kept a diary that includes a detailed account of the expedition. It is the only known account penned by a German member of St. Leger corps. The excerpt featured with this post covers July 10 to 15, 1777, five days of the Hanau Jägers’ journey down the St. Lawrence River from Montreal toward Lake Ontario. Hildebandt mentions Fort La Galette, which refers to Fort de La Présentation, or Fort Oswegatchie. It was located across the St. Lawrence from the old trading post of La Galette. I have not been able to identify Point aux Barique. Based on Hildebrandt’s account, it must have been located somewhere between the Long Sault rapids and Fort la Galette.

Hildebrandt describes the journey as difficult, largely on acount of the many treacherous rapids in the St. Lawrence River that the contingent had to navigate. The men frequently had to walk in water chest deep, pulling along their loaded bateaux on ropes. At times, they marched through what Hildebrandt described as an uninhabited wilderness, despite the fact that the company frequently encountered Native Americans. (Like other members of the German corps, Hildebrandt refers to Native Americans as “Wilde,” which translates as savages. In an effort to remain faithful to the original record, I will use that term in the translation.) The entry, moreover, provides rare evidence for the presence of women and children with the Hanau troops that were part of St. Leger’s corps: During the stop at Fort La Galette, Hildebrandt and a fellow officer served as godfathers to a child born to the wife of a Hanau Jäger named Brandt.

On the morning of the 10th, the storm subsided a bit. Therefore, orders were given to take down the tents and depart. Because we did not have any sails [for the boats] we raised blankets, and we therefore covered a pretty good distance. At 9 o’clock, after the rain had stopped, there was absolutely no breeze, about which the Canadians were very unhappy. Some of them pulled smoking tobacco out of their bags, cut a piece off and threw it into the water while saying “mannito wawa” (evil spirit, make wind for us). I laughed heartily about this. However, these people assured me that the savages (“Wilden”) regularly do this, and when they were not getting any wind, they would also throw in metal and stones, and they would reliably get wind. However, we did not get any wind. Whether [the tobacco] was not good enough for the devil – since it was Canadian spun tobacco – shall remain undecided. At 11 o’clock, we reached two small islands at the end of the lake which are called Ross Islands. They are covered with wild grapevines with lots of grapes and also various trees with apples and plums that the savages (“Wilden”) harvest and prepare. At 1:30 PM, [we arrived at] Saint-Régis, which is another island inhabited by savages (“Wilden”). Three young girls, of whom the oldest was about 12 years old, came to us in canoes made of birch. They brought smoked fish, which I accepted. I wanted to pay them with money, but they refused it. I therefore had them provided with Zwieback [a kind of crisp bread] with which they very happily departed. At 7 o’clock in the evening, after we had passed many dangerous waterfalls and the boats had therefore not remained together, I ordered [the men] to camp along the shore. All of the boats arrived by 9 o’clock in the evening.

We departed at 5 o’clock in the morning of the 11th. On both sides [of the river], there was nothing but tall and uninhabited woods which are separated into various islands surrounded by flowing water. In the evening, we reached a place named Long Sault where we encamped. Although one does not find habitations along these islands, there are campsites by savages (“Wilden”). They are made of sticks that are put together and covered with bark, which is also used by them on the ground instead of bedding. [62]

On the 12th at 4 o’clock in the morning, we again departed, and because there continued to be unpleasant rapids (waterfalls), I marched with the greatest part of the company through the densely overgrown woods. On this march, so many “Haselhühner” [probably a kind of grouse] were flying out of the bushes that I shot ten of them within a few minutes with my hunting rifle. At 8 o’clock in the evening, we camped in the greatest wilderness.

On the 13th, we departed at five o’clock in the morning, and at eight o’clock in the evening, we landed at the Point aux Barique. Because of the many waterfalls, the men had to pull the bateaux on ropes all day long, and they had to walk in water up to their chests during this march. Moreover, it was raining all day with no end. It was impossible to watch this labor without pity.

On the 14th, after the tents had been taken down in steady rain and we had departed, we arrived at Fort La Galette at 10 o’clock. This fort is small and everything is made of wood. It was staffed with an officer and 30 men who set up their tents and encamped next to the fort. Due to the continuous rain, everything had become drenched, so that the men’s cartridges and also three bags of hard biscuit had turned into porridge. I therefore turned in three bags, each weighing 108 pounds, and I received bread for three days for them.

On the 15th, we had a day of rest, and the men had to dry and repair their powder and cartridges. Because they continuously had to bathe in water, moreover, their shoes and stockings were completely torn up. I still had from Portsmouth [England] a piece of leather for soles. I distributed it and everyone had to help himself as best as possible. At 2 o’clock in the afternoon, I was notified that a company [soldier’s] wife by the name of Brandt was in labor. I therefore requested from the local commandant to leave said woman in the barracks, which was granted. At 4 o’clock, she was already delivered of a boy, and since it is impossible to find a clergyman within 100 [miles?] or more, I baptized him in the evening at 7 o’clock with the name Georg Philipp, since I and Lieutenant [Georg Philipp] Scheurer stood in as godfathers.

Image: Thomas Davies, A View of Fort La Galette, Indian castle, and Taking a French Ship of War on the River St. Lawrence, by Four Boats of One Gun Each of the Royal Artillery Commanded by Captain Streachy (1760), National Gallery of Canada, https://www.gallery.ca/collection/artwork/a-view-of-fort-la-galette-indian-castle-and-taking-a-french-ship-of-war-on-the.