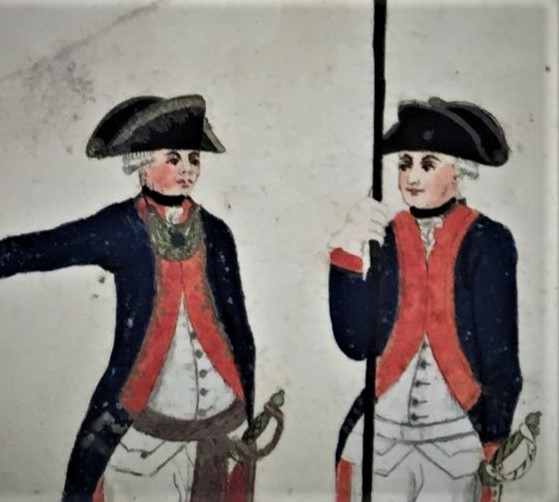 This post features four entries from the Stammbuch (friendship book) kept by Captain Friedrich Andreas Herman Schotten (1744 – 1803) of the Regiment von Mirbach (after 1780, Jung von Lossberg). In October 1777, the regiment was part of an exclusively German detachment that was selected by General Howe to attack Fort Red Bank in New Jersey across the Delaware from Philadelphia. In addition to the Mirbach Regiment, the corps included the Hessian grenadiers as well as the Ansbach and Hessian Jäger. The force of around 2,000 men was commanded by Colonel Carl von Donop. The attack ended in disaster. The Hessian and Ansbach troops suffered close to four hundred losses. The Mirbach Regiment alone had fifteen captured and close to one hundred dead or wounded. It would be the only battle in the war in which the regiment played an active role, and it was devastating. Schotten lost an arm as a result of a wound he suffered; it was amputated several days later. By April 1779, he was back in Kassel.

Before his departure from New York, Schotten asked a number of soldiers and other members of the Hessian corps to write into a Stammbuch that he had recently acquired. Friendship books such as this had enjoyed significant popularity in Germany at least since the sixteenth century. They could include autographs from prominent or respected individuals, such as religious leaders and university professors, or they featured more personal entries designed to serve as a memory for the owner’s friends and acquaintances. These entries, which were dated and signed, typically consisted of poems, personal notes, and similar expressions of affection. By the eighteenth century, the tradition was especially popular among university students who collected entries from faculty and fellow students. Members of the military also kept friendship books. Captain Schotten was one of them.

I selected four entries that were written in New York between May and September 1778. They are by the Hessian Chaplain Georg Christian Cöster, Lieutenant Carl Friedrich Rüffer of the Regiment von Mirbach, the Jäger Johann Ewald, and Captain Johann Kaspar Kümmel of the Regiment Erbprinz. Their dedications consist of short poems or sayings that are typical for these kinds of collections. They are personal or formulaic or both. For example, the first line of Cöster’s entry comes from Albrecht von Haller’s poem Über den Ursprung des Übels (1734). However, most of his note refers to the time they spent together in Philadelphia, when Chaplain Cöster served as a source of strength and comfort for Schotten as he was recovering from his serious wound. Rüffer’s entry is almost entirely formulaic, and Ewald’s includes a mix. The contribution by Kümmel includes two, seemingly random, sayings in English. Maybe Kümmel was making an inside joke or he tried to show off his English skills. Either way, they serve as a reminder of the larger cultural context in which the two Hessians had become friends.

A Note About the Source: Unfortunately, my search for the original Stammbuch has not been successful. The Murhard’sche Bibliothek in Kassel confirmed that they had it in their collections until 1943, when various items related to the Schotten family were given to the Director of the Deutsche Gesellschaft für Wehrpolitik und Wehrwissenschaften. These items, including the Stammbuch, presumably ended up with descendants of Captain Schotten. Based on information I received from Margarete Bott of the Heimatkundliches Archiv Homberg, Grebe’s son knew that his late father had been in touch with members of the Schotten family at some point. However, he does not know what happened to the Stammbuch and other material. Thankfully, several fragments from Schotten’s journal have been preserved in the collections of the Murhard’sche Bibliothek. However, the Stammbuch remains missing.